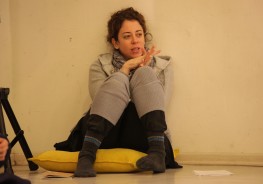 completed her first degree in international relations and the "multidisciplinary program" at the Hebrew University in Jerusalem.
Studied at the Jerusalem Academy of Music and Dance and at the Two Year Choreography Program at Kelim.

Ayala Frankel has extensive experience in leading feminist, community projects. She is the founder and artistic director of the ‘NIFGASHOT’ project (2017-2021), which works to affect social-gender change through art. At the heart of the project is ongoing work with groups of young women and elderly women from marginalized communities. This work culminates in the annual ‘NIFGASHOT’ festival, which is produced in collaboration with communities of local women.

Ayala presented her works in various Festivals in Israel, NYC and Italy and she is a member of the Israeli choreographers association. Her work was supported by the Ministry of Culture and the National Lottery. As a dancer, Ayala has performed with many choreographers: Ohad Naharin (Bat-Sheva Company), Yasmeen Godder, Yossi Berg and Oded Graf, Iris Erez, among others.

Ayala holds a B.A. in philosophy and art history.

Anat Danieli is a creator whose fields of action relate to dance, choreography, education, community and politics of body and spirit. She began creating solo works in 1989, as well as for the Batsheva dance group, the Batsheva ensemble and more, and in the years 1994-2007 she created within the dance troupe Anat Danieli. Anat is the winner of the Rosenblum Prize for 2007, the Ministry of Culture Prize for 2006 for her choreographic work, the Ministry of Culture Prize for 1996 for a young artist, and the "Gvanim BeMachol" (Shades in Dance) Prize in 1990. Between 2007-2012, Danieli took a break from dance to re-examine her work. During these years she established the Kelim Choreography Center in collaboration with her student Tal Garbinski Amishi, and led the center as artistic director until 2021. In 2012 she returned to create and appear in her works, developing and formulating the thought and practice of 'useful choreography'. 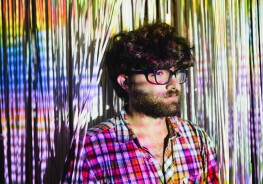 Cultural activist and creator at times.

A man of Artistic Solutions: consulting and expert in management, production, marketing and content in the fields of culture, art, community and city-living.
He has worked with many artists and institutions, including Israel Festival, Clipa Theater, MoBY - Museums of Bat Yam, the School of Visual Theater and the Choreographers' Association.
Creates enriching connections within creative communities, the content they produce and to new audiences.

Graduate of the Musrara School of Art (Jerusalem) and the Olympus program at Beit Liebling (Tel Aviv). 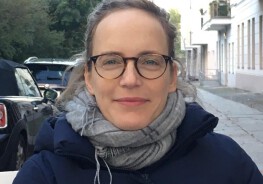 May Zarhy /
Director of The new choreography program

Choreographer and performer May Zarhy, is an independent maker, whose work ranges between stage pieces, site-specific and participatory works. In her work, she is drawn to the intersection of choreography, performance, and sound art. She explores materiality of the human body through movement and sound. Among her pieces are: Ausencia, 2021 (Atelier Shemi Cabri Israel, The Center for Contemporary Art Tel-Aviv-Yafo), untitled, 2019 (HaZira Performance Art Arena, Diver Festival), Kol Yom, 2018, in collaboration with musician Elad Bardes (Loving Art Festival Tel Aviv), the VOICES, 2017, in collaboration with vocal artist Michal Oppenehim (Rencontres Chorégraphiques Internationales de Seine-Saint-Denis, Paris France), and more.

Zarhy graduated from the Rotterdam Dance Academy in the Netherlands in 2006. During her studies, she also worked as William Forsythe’s assistant at the Forsythe Company (2005). In 2007, she completed Xavier Le Roy and Mathilde Monnier’s ex.e.r.ce post-graduate program, in Montpellier, France. Later, Zarhy co-founded with Fabrice Mazliah and Ioannis Mandafounis the collaborative trio Mamaza (2009 - 2014), with whom she created and performed around the world. The trio members were selected as associate artists at deSingel, Antwerp (2011-2012), and resident artists at Künstlerhaus Mousonturm, Frankfurt (2012-2014). Zarhy also works as a dramaturg and rehearsal director for fellow artists, and she teaches workshops at The School of Visual Theater Jerusalem, Jerusalem Academy for Music and Dance, and more.